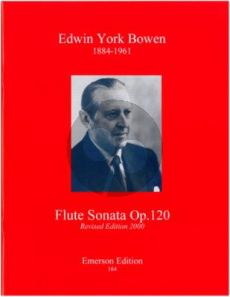 Edwin York Bowen was born in London in 1884, the youngest son of the owner of the Whisky distillers Bowen & McKechnie. He made his musical debut when he was 8 as the soloist in a Dussek piano concerto. At the age of 14 he won the Erard Scholarship to the Royal Academy of Music, where he studied the piano with Tobias Matthay, and composition with Frederick Corder. As a student he won many important prizes for both piano playing and composition, and when he left the Academy he had also won the Medal of the Worshipful Company of Musicians. By the time he was 20 his works (including three piano concertos) had been successfully performed and admired by such conductors as Hans Richter and Sir Henry Wood. During the First World War he served in H.M.Scots Guards, eventually transferring to the Regimental Band as a horn and viola player. He contracted pneumonia whilst in France and was brought back to England by his wife, who was an ambulance driver. Subsequently he returned to the Royal Academy as a Professor of Pianoforte. He died in 1961. Duration: 18.30 min.