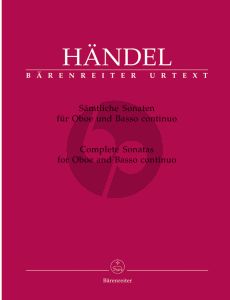 Handel's sonatas for one solo instrument and basso continuo are some of the finest examples found in the genre. The three oboe sonatas found in our new edition are prime examples of this.

The Urtext of the Halle Handel Complete Edition forms the basis for the new publication. As a scholarly critical edition it is concerned with the authentic sonatas written by Handel and not those often found in other collections which are either transcriptions of works originally composed for other instruments (e. g. the F major sonata which is often found in G major) or spurious compositions. All editorial additions are clearly indicated and as such players have a solid basis for rendering performances true to the composer's intentions. The publication includes an informative historical as well as performance practice introduction by the noted Handel scholar Terence Best. It contains a score and two oboe/basso continuo parts.

All of this adds up to a sure winner for oboists.
- Authoritative edition based on the reliable Urtext of the Halle Handel Edition
- Performance practice tips (English/German)
- Score with two oboe/basso continuo parts
- Introduction (English/German)