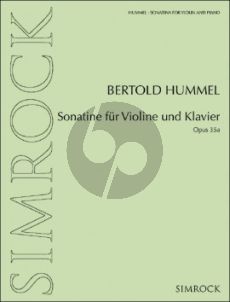 As an educational and recital piece, Bertold Hummel's Sonatina Op. 35, composed in 1969, has accompanied many a young musician following his or her own path. Having sold a thousand times all over the world, it is one of the composer's best-known works and has been included in the repertoire list for the 'Jugend musiziert' competition by the German Music Council.

The three movements are characterized by warmth and exciting rhythms: in the powerful Maestoso, the sonority of the main theme is contrasted with a lyrical side theme; the recapitulation ends with an impulsive Fugato. The second movement Elegie consists of a single soulful melody over spherical harmonies of the piano. As a highlight, playful ease, marching rhythms and dramatic intensifications alternate in quick succession in the Finale vivace, followed by wild arpeggios that conclude the piece.

Originally composed for violin, versions for viola and violoncello were already commonly used. To mark its 50th birthday, Simrock / Boosey & Hawkes present the work in a revised, newly set edition. Written in the 1990s by the composer himself and now available for the first time, the versions for alto and tenor saxophone are valuable additions to the repertoire for beginning instrumentalists.