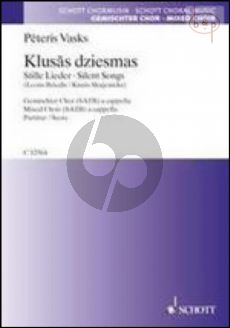 Earn 250 Poppels with this product

It is particularly the choral music of Peteris Vasks that reveals his strong attachment to his Latvian home country. Nature, customs and traditions and the idea of freedom are the central themes of his musical settings. He carefully incorporated modern techniques of choral music. Alternating with traditional, or even archaic singing, a very colourful, impressive tonal image develops in front of the listener. The four short homophonous movements are easy to sing, thus having a folksong-like character. We have added to this edition German and English translations for better understanding as well as phonetic transcriptions of the Latvian language.