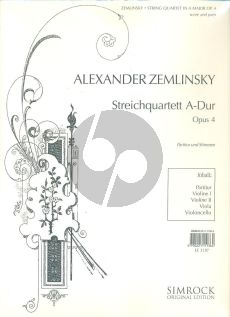 During his lifetime, Alexander Zemlinsky (1871-1942) was very highly regarded not only as a composer but also as a teacher and conductor. His works are an authentic testimony of the turbulent developments in music between 1890 and 1940. He stands between times and styles but in this intermediary position he found a rich, unmistakable, musical language. His personality and work epitomize one of the most fascinating epochs of art in Europe. Zemlinsky was born in Vienna. His musical talent became evident at an early age and he was enrolled at the Gesellschaft der Musikfreunde Konservatorium (Conservatory of the Society of the Friends of Music) when he was 13 years old. There he studied piano and composition. He was greatly influenced by Johannes Brahms, who at the time was serving as President of the Gesellschaft. Brahms thought highly enough of the young man's compositional abilities to recommend Zemlinsky's Op.3 Clarinet Trio, written shortly after graduating, to his own publisher Simrock for publication. About this time, Zemlinsky also met Arnold Schoenberg. The two became close friends. Zemlinsky gave Schoenberg lessons in counterpoint, thus becoming the only formal music teacher Schoenberg would have. Later, Schonberg married Zemlinsky's sister. By 1900, Zemlinsky was firmly established as an important, though not a leading, musical figure in Vienna. He worked both as a composer and conductor. However, though he did well, he was unable to achieve the major success he had hoped for and therefore left for Prague in 1911. In Prague, he held the important post of opera conductor of the Deutsches Landestheater until 1927. He became well-known as a perceptive interpreter of Wagner, Bruckner, Mahler, and Schoenberg. In 1927, he moved to Berlin to take up a position as a conductor of a major opera house. In 1933, he returned to Vienna where he remained until 1938, before emigrating to New York. String Quartet No.1 dates from 1896 and is unquestionably one of the most important quartets written before the advent of the Second Vienna School and 12 tone music. In this work, Zemlinsky has freed himself from much of Brahms' influence, which can only really be felt in some of his use of rhythm. The bright Allegro con fuoco opens almost abruptly. Characterized by highly accented and syncopated rhythms, a more lyrical second theme smoothes some of the rough edges away. The main theme to the second movement, Allegretto, is a naive, and simple folk melody. Suddenly, a stormy middle section full of excitement and interesting rhythms blossoms forth into a wild and ferocious gypsy dance. The third movement, Breit und Kraftig, is exactly as described by the title, broad and powerful. The theme thrusts forth only to proceed in a rather soft and diffident fashion, leading to a lovely and highly romantic second theme. The heroic and buoyant finale, Vivace e con fuoco, is one of the glories of late romantic chamber music, full of original thematic ideas and wonderfully executed. It goes without saying that this is a concert performance work of the first order. However, it is is still well within the reach of experienced amateurs.