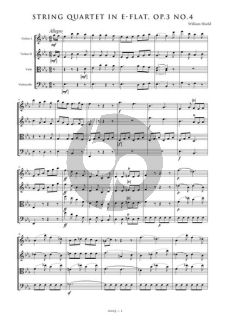 Earn 2,250 Poppels with this product

The present work was published by William Napier in 1782 under the inspection of Shield himself. No autograph score survives and Napier's printing, a copy of which is preserved in the Bodleian Library, Oxford, under the call number Mus 177c.69, is the only source of this edition. The title-page, which mistakenly prints 'flute' for 'oboe' reads: Six / QUARTETTOS / five for two / Violins a Tenor & Violoncello / and one for a / Flute, Violin Tenor, / and / VIOLONCELLO / Composed & humbly dedicated to the / Right honorable / LORD KINNAIRD / by / William Shield. / Op.III. [swelled rule] Pr. 10:6 / Printed for Wm Napier No 474 Strand.

This edition presents as faithfully as possible the intentions of this source. The style and notation of articulation and dynamic markings have been standardised throughout and, where missing, markings have been reconstructed from parallel passages. The notation of appoggiature has also been standardised to minimize confusion. Obvious wrong notes have been corrected without comment; editorial emendations with no authority from the source are placed within brackets.