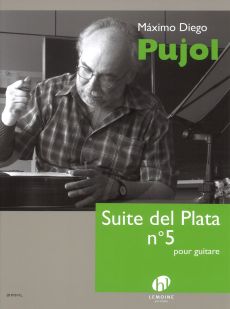 The Suites del Plata are modeled after the Dance Suite, an instrumental form very in vogue during the Baroque period, which was a series of popular dances from different parts of Europe, all related by some melodic-rhythmic element and preceded by a Prelude. The Suites del Plata bring together musical pieces from the area known as "La Cuenca del Plata", an extensive geography around the Río de la Plata and its tributaries, in which a rich and abundant variety of dances, popular music forms and styles emerged and still coexist today.

Suite del Plata n°5 begins with a Prelude entitled "Desde el aire" (From the air), an ethereal and light moment. It is followed by an urban and changing piece called "Sarasa" in which everything is said, or nothing... "Gris llanura" (Gray plain) takes us into the overwhelming solitude of the Pampean plain. "Los lirios" (The lilies) is a creole Waltz inspired and dedicated to my own home. To close the work we find "Candombe final" (Final Candombe), an energetic dance of Uruguayan origin that helps us face life from a different place.