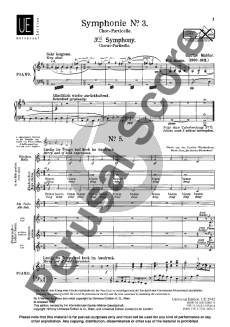 'Everyone knows by now that some triviality always has to occur in my work, but this time it goes beyond all bounds.' Thus wrote Gustav Mahler, in the summer of 1896, gleefully looking forward to the consternation that his new Third Symphony was going to cause the critics. […] Mahler had created a successor to the Second that was even Ionger and more bizarrely structured. This time there were six movements, one (the first) almost as long as the other five put together, mixing elements of symphony, tone-poem, Lieder, oratorio, folk rnusic and, most bewilderingly, juxtaposing the sublime and the deliberately 'trivial'- the sweetly naïve posthorn tune in the third movement the children's playground songs of the fifth. Despite his heroic cheerfulness, internally Mahler must have braced himself for another massed rejection. lf so, he was in for a surprise. The world premiere of the Third Symphony - in the small German town of Krefeld, in 1902 - was a huge success. […] The symphony's 1904 Viennese premiere incensed the critics. […] And yet amid the scandalized outraged comments one can find equally impassioned praise. After hearing that same 1904 Viennese performance, the young Arnold Schoenberg (originally hostile to Mahler) told Mahler ecstatically that the symphony had revealed to him 'a human being, a drama, truth, the most ruthless truth!' (Stephen Johnson, taken from the program note of a concert by the BBC Philharmonic on February, 13th 2010, in Manchester)