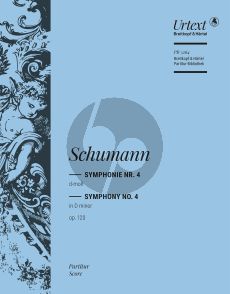 Robert Schumann composed his D-minor Symphony in 1841, just after completing his Symphony No. 1 in B flat major op. 38. This version remained unpublished during the composers lifetime. After a thorough revision in late 1851, the work was given its first performance in Düsseldorf on 3 March 1853 under the composers direction. It was published that same year by Breitkopf & Härtel under the opus number 120 as Symphony No. 4.

Joachim Draheims Urtext edition presents Schumanns Fourth Symphony in the 1851 version. The primary source is the first edition overseen by Schumann and practically free of errors.