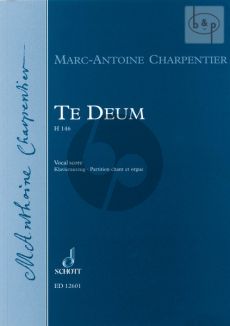 Of the 4 surviving settings of the Te Deum by Charpentier, the present one composed in the 'joyeux et très guerrier' key of D major, is undoubtedly his most famous work, thanks to television producers who chose its opening prelude to be the Eurovision signature tune in the early 1950s. Although Charpentier's Parisian career is quite well documented, little is known about the genesis and first performance of the Te Deum but it has been suggested that it may have been performed during the celebrations of the military victory of Steinkerque (3 August 1692). It is likely, however, that it was commissioned by the Jesuits of the church of Saint-Louis (today, Saint-Paul-Saint-Louis) for whom Charpentier had been working as maître de musique since 1687. 54 pages.