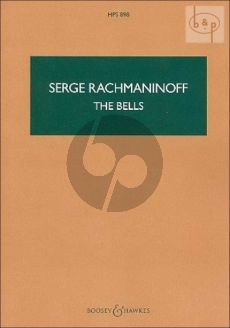 Earn 2,100 Poppels with this product

The Bells, Op. 35, is a choral symphony by Sergei Rachmaninoff, written in 1913. The words are from the poem The Bells by Edgar Allan Poe, very freely translated into Russian by the symbolist poet Konstantin Balmont. The traditional Gregorian melody Dies Irae is used frequently throughout the work. It was one of Rachmaninoff's two favorite compositions, along with his All-Night Vigil, and is considered by some to be his secular choral masterpiece. Rachmaninoff called the work both a choral symphony and his Third Symphony shortly after writing it; however, he would later write a purely instrumental Third Symphony during his years in exile. Rachmaninoff dedicated The Bells to Dutch conductor Willem Mengelberg and the Concertgebouw Orchestra.