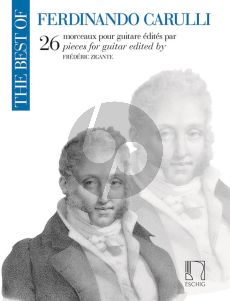 Ferdinando Carulli’s modern popularity is above all linked to his Méthode op. 27 that, even today, more than 200 years after the publication of its first edition, remains the most reprinted, most revised, most translated and most used guitar method in the whole world. In fact, its success has been so great that it has effectively drawn a veil over the rest of his musical production, so that Carulli, upon closer inspection, turns out to be the least known, least researched, and least performed among all of the great guitar composers who lived at the turn of the 19th century, such as Fernando Sor, Mauro Giuliani, and Niccolò Paganini. This edition is based upon the first editions curated by Carulli himself. In one case, the Six Andantes op. 320, it has been possible to compare the printed edition to an autograph manuscript, one of the very few that have come down to us. 128 pages.