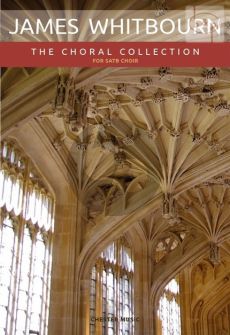 This glorious collection of beautiful choral music by composer James Whitbourn includes fifteen short works drawn from his oeuvre from the first few years of the 21st century. Many of his greatest compositions are included in The Choral Collection, with many of the pieces working perfectly for seasonal performances, while also reflecting the many fruitful collaborations of Whitbourn's distinguished career. All works are arranged for SATB Choir. James Whitbourn has become renowned throughout the world for his acclaimed compositions and settings of numerous texts. He has been described as truly original and an innovator of contemporary British choral music, collaborating with people like Archbishop Desmond Tutu and the Choir of King's College, Cambridge. The former appears here, as A Prayer Of Desmond Tutu, a setting of one of the Archbishop's prayers. His arrangements and compositions for the King's College Choir have been universally critically acclaimed, with A Great And Mighty Wonder, Nunc Dimittis and Were You There? representing these hugely popular collaborations. Whitbourn has also had a very close relationship with the BBC since his beginnings as a composer, working with them on three pieces within The Choral Collection. Eternal Rest and Give Us The Wings Of Faith were both composed specifically for television broadcast, the former (in its orchestral form) was played for the funeral of the Queen Mother in 2002. His longest work, for which he is most famous, is a setting of text from 'the Diary of Anne Frank'. There Is No Speech Or Language comes from this work, taking its text from other sources, but that still maintain the beauty and tragedy of the wider piece. The Choral Collection of fifteen compositions by James Whitbourn is full of beautiful, haunting, uplifting and inspiring melodies for SATB Choir and Organ Accompaniment from one of the most treasured British choral composers. The brilliant choice of texts throughout is matched only by the sheer compositional skill of Whitbourn in evoking the emotions of the words in the musical form. Also included are suggestions for seasonal song use, a list of recordings, and fascinating song notes written by Whitbourn himself. The joy of choral singing is nowhere more evident than in a work by James Whitbourn, and performances of any piece within this collection is sure to be remembered for a long time to come. 112 pages.