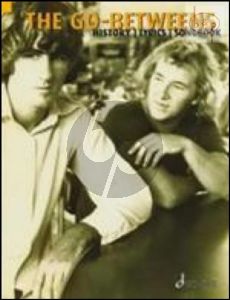 The Go-Betweens were founded in 1978 when the two students Grant McLennan and Robert Forster met at the University of Queensland in Australia. Unlike many other bands, the Go-Betweens wrote and played, right from the beginning, perfectly structured, guitar-oriented pop songs - beautiful and timeless. After their breakup in the early 1990s, both embarked on eventful solo careers. A joint tour in 1999 led to their reunion. In 2005, they released their ninth and last album 'Oceans Apart'. This album as well as their worldwide tour attracted considerable attention, and in Australia the Go-Betweens received the prestigious ARIA Award for the first time. The magnificent Grant McLennan died unexpectedly on 6 May 2006. The 'Go-Betweens Songbook' contain a comprehensive history, 26 of the best and most popular songs a discography and photos.