The Library Of Showtunes Piano-Vocal-Guitar - Album 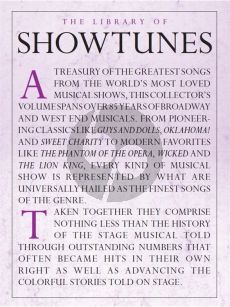 The Library Of Showtunes is a treasury of the greatest songs from the world’s best-loved musical shows. This collector’s volume spans over 85 years of Broadway and West End musicals, giving you a vast number of the greatest showstoppers, all arranged for Piano, Vocal and Guitar.

From pioneering classics like Guys And Dolls, Oklahoma! and Sweet Charity to modern favourites like The Phantom Of The Opera, Wicked and The Lion King, every kind of musical show is represented by what are universally hailed as the finest songs of the genre. Every one of these amazing songs is arranged with Piano parts, vocal melody and Guitar chord boxes and symbols, as well as being spiral bound for utmost convenience.

Taken together, the songs included in The Library Of Showtunes comprise nothing less than the history of the stage musical told through outstanding numbers that often became hits in their own right as well as advancing the wonderfully colourful stories told on stage. From Summertime to Over The Rainbow and from Can You Feel The Love Tonight to I Dreamed A Dream, these incredible tunes are essential playing for all fans of musical theatre.

The stage musical was born on Broadway in the early years of the 20th century as a drama where the story and the music complemented one another. No longer just a series of songs linked by a flimsy plot, these new musicals had substance. Early classics like Show Boat and Carousel were not afraid to use tough source material and they led the way for what would become a wildly popular art form that could tackle any subject and, in the end, be conceived just as successfully in Europe as the United States.

Celebrating the passion, emotion and dramatic power of the stage musical, The Library Of Showtunes is both a joyful celebration and an enduring reference book, allowing you to bring the power and beauty of the stage song into your own home. This sheet music songbook contains Piano, Vocal and Guitar arrangements of all the essential stage music songs in a large single volume, putting the greatest showtunes ever in one place.