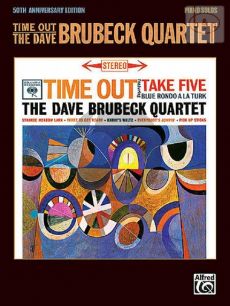 The Dave Brubeck Quartet's 1959 album Time Out changed the sound of jazz and American music. Brubeck's experimentation with meter, harmony and even Turkish rhythms eventually earned him the cover of Time Magazine; the first jazz musician to achieve such a feat. Saxophonist Paul Desmond's composition "Take Five" went on to become the first million-selling jazz instrumental single on the Billboard Hot 100. This folio celebrates the album's 50th anniversary with full-color artwork from the original record, and a 10 page write-up from jazz historian Ted Gioia. All seven compositions from the monumental recording- just as Brubeck played them - are featured in this collectable folio. 64 pages.