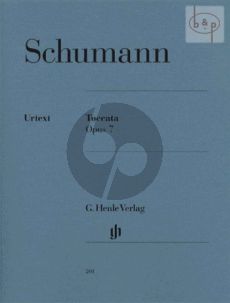 Schumann began work on the Toccata op. 7 when he was only 20 years old. At the time he was studying law, following his family's wishes. He did not, however, intend to have his first manuscript, entitled Exercice, published; it was only when he was finding his way as a musician that he turned to the sketches again. Similar to his approach with the Paganini studies, he endeavoured to combine virtuosity with musical content. The print version of this Toccata differed greatly from the first ideas for the Exercice. The autograph of the final version is missing, although the Exercice has survived in the form of Schumann's manuscript. It is reproduced in the appendix of our revised edition of the first publication.