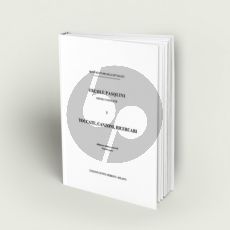 Earn 4,550 Poppels with this product

Ercole Pasquini (1550 ca-ante 1620), working for many years in Ferrara, then Frescobaldi’s predecessor as organist of the Cappella Giulia, leaves a considerable corpus of keyboard music that identify him as a link between Frescobaldi and Naples. It is half a century since the first critical edition of Ercole Pasquinis keyboard music was published (CEKM, vol. 12). This new edition (in two volumes) appears in the light of subsequent scholarship. It offers new solutions for some troublesome passages. It includes a number of pieces that were not included in the previous edition, but which do seem to have been attributed to Pasquini, as well as unattributed pieces which may well have been by him. It also takes account of a source (ms. Naples 48, dated ca.1600) which has come to light in the intervening years. This manuscript includes a copy of a Canzona by Pasquini that is older and generally superior to the other surviving copies of this piece. The preface contains detailed discussion of the composers biography, the provenance of the sources, and the performance implications of the notation. Both preface and commentary are in English and Italian. (2 Vols.)