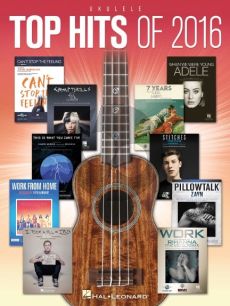 2016 has been a great year for music! This collection lets you play 10 of the year's biggest hits on the Ukulele. This album features songs from some of the greatest artists of the 21st century, including Adele, Coldplay and Calvin Harris, as well as relative newcomers to the music scene such as Lukas Graham, Gnash and Shawn Mendes. All but one of the songs featured in this book have been top 10 chart hits in the UK and around Europe. With hits such as Cheap Thrills, 7 Years, Pillowtalk, Dark Necessities, When We Were Young and more, Top Hits Of 2016: Ukulele contains something for everyone.