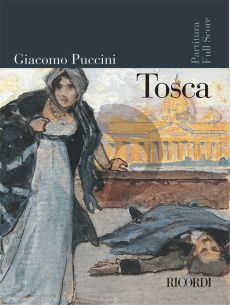 Tosca was first performed in Rome, at the Teatro Costanzi, on 14 January 1900. Based on a play by Vincent Sardou, the libretto unfolds in an effective rhetoric that is both direct and decidedly dramatic. The characters and the action seem embossed with touches of polished emotional pliancy, reinforced by the orchestration and vocal style of the music. But the music is also responsible for the more subtle, indirect psychological shading to this context of basic contrasts. Thus we glimpse the clear outlines of generous self-denial, beguiled dreams, listlessness, fierceness - and death, which with no less precision brings all things mercilessly to their end. On the cover: Tosca and Cavaradossi on the rampart of Castel Sant’Angelo; watercolor by Leopoldo Metlicovitz for a series of postcards, 1900. Cover illustration property of Casa Ricordi.