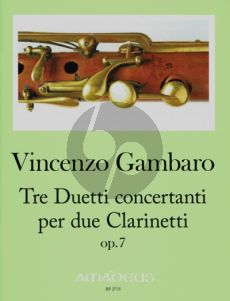 There is little information about the clarinettist and publisher Vincent or Vincenzo Gambaro, and what we have is confusing because there was another clarinetist Jean Baptiste (or Giovanni Battista) Gambaro in Paris at the same time, and sometimes title pages of editions were ambiguously attributed
to “Gambaro.” The obvious conclusion that both were brothers can not be confirmed yet by the sources known to us today.
Actually, the two complemented each other excellently. The musician Giovanni Battista Gambaro was probably born in 1785 in Genoa. He moved to Paris around 1813/1814, where he called himself Jean Baptiste. In 1816 he was given the position of second clarinetist in the Théâtre Italien, and in 1817
he was able to take François Dacosta’s place as first clarinetist, when the latter became first clarinettist at the Paris Opera.
Around 1828 it would seem that Gambaro also began to conduct the orchestra. His position enabled him to advocate the “Müller Universal Clarinet” developed by Iwan Müller. In or after 1846 he returned to Genoa, where he died at the beginning of March 1850.
Similarly, the composer Vincenzo was also born in Genoa, perhaps in 1772, and after sojourns in Trieste and Vienna, he established himself in Paris, where he died on 31 August 1828.

Vincent Gambaro composed only ten original works, of which his op. 2 does not seem to have survived: Duos for two clarinets op. 1, 3, 7 and 10 and Duos for clarinet and oboe op. 6; Quatuors Concertants for flute, clarinet, horn and bassoon op. 4 and 5; Variations for clarinet and orchestra op. 8 and the
Caprices op. 9 for clarinet solo. In addition, he edited works for military band and provided arrangements from works by Haydn for clarinet quartet, by Beethoven for wind quartet,
and by Rossini for string quartet.
Our new edition of the Duos Concertants op. 7 is based on the original edition of 1817 (copy in the Royal Conservatory of Antwerp). The titel page reads:

The engraving was probably executed quickly after an often ambiguous manuscript. Inconsistencies in slurs were adjusted based upon parallel passages. In addition, it was impossible to detect any intention in the varied use of dots and vertical lines (thin wedges), which is why we have opted for dots alone, as
found in early reprints.The variations in the first duo are based on the Romance from Joseph Haydn’s Symphony No. 85 “La Reine.”