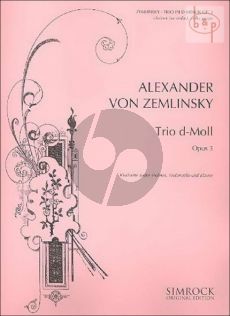 When Zemlinsky showed his Trio in d minor for Clarinet, Cello and Piano to Brahms in 1895, Brahms was mightily impressed and immediately recommended that his own publisher Simrock print the work. Simrock, however, with an eye for sales, insisted that Zemlinsky add a violin part so the work could be performed by standard trio. Zemlinsky did not simply arrange the clarinet part for violin, he wrote a part specifically for the violin and as a result, one can almost say that he created two works, each which stands on its own. During his lifetime, Alexander Zemlinsky (1871-1942) was very highly regarded not only as a composer but also as a teacher and conductor. His works are an authentic testimony of the turbulent developments in music between 1890 and 1940. He stands between times and styles but in this intermediary position he found a rich, unmistakable, musical language. His personality and work epitomize one of the most fascinating epochs of art in Europe. Zemlinsky was born in Vienna. His musical talent became evident at an early age and he was enrolled at the Gesellschaft der Musikfreunde Konservatorium (Conservatory of the Society of the Friends of Music) when he was 13 years old. There he studied piano and composition. He was greatly influenced by Johannes Brahms, who at the time was serving as President of the Gesellschaft. By 1900, Zemlinsky was firmly established as an important, though not a leading, musical figure in Vienna and therefore accepted the important post of opera conductor of the Prague Deutsches Landestheater until 1927. He became well-known as a perceptive interpreter of Wagner, Bruckner, Mahler, and Schoenberg. In 1927, he moved to Berlin to take up a position as a conductor of a major opera house. In 1933, he returned to Vienna where he remained until 1938, before emigrating to New York. The big, broad opening movement, Allegro ma non troppo, has for its main theme a heroic melody to be played -Mit Schwung und Wärme- (warmly and with swing). This is late Romantic music on a grand scale. The coda is particularly well done and makes a great impression. Although the influence of Brahms is undeniably in the language of the music, it does not sound much like him. In the second movement, Andante con moto espressione, which in the clarinet version calls for an A clarinet to create a bright sound, the violin plays the overtly romantic melody in a high register. The middle section is slightly faster and very freely written. It takes an almost melodramatic stance but is undeniably effective. The bustling finale, Allegro, has a remote slightly exotic quality, interspersed with dramatic and passionate outbursts.