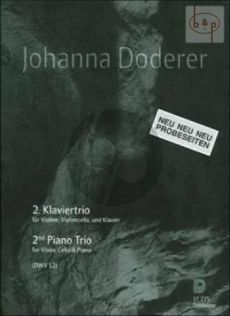 This piano trio was written on commission for the 200th anniversary of the death of Joseph Haydn. It was a pleasure to use the occasion to think about and to reflect on this composer. Concerning the contents and messages of his works, Haydn was always a great role model of mine. Apart from the great variety of his themes, many of which share a cheerful character, it is the utter seriousness in treating and developing these themes that touches me in Haynd's music. Musical craft in its truest sense is a tool mediating between expression, intuition's free flow, and their realization. It is this tightrope act which I, too, attempt in my works. Highest possible perfection in the well-considered use of the means as well as reduction to the essential are faced off with an emotional space, the space that con no longer be reached by words.

In this piano trio I have decided to use an unostentatious initial theme and an almost comical first auxiliary theme. Seriousness enters with the second auxiliary theme - in the development section. However, these themes act more like a gossamer wall in the foreground which one penetrates and which one very soon leaves behind. Sometimes they light up again, as if from memory, but now they form the entrance into the world of an acoustically pulsating web.

In spite of all coolness and deliberation at the beginning of the composition, here, in the development section, emotion does demand its place - the parts collide as in an intoxicating dialogue, thus breaking the acoustically well-ordered net.

The tempo indications are meant more freely, expansion and acceleration - all is permitted.