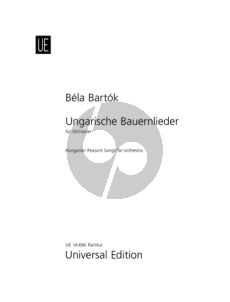 In the early 1930s, Bartók resolved to compose some orchestra pieces which would be easy to play and thus could be performed more often than his other demanding, musically and technically difficult scores. So in 1933 he returned to his "Fifteen Hungarian Peasant Songs" for piano (1914-1918), nine of which he orchestrated and called "Hungarian Peasant Songs", intending to make the prettiest folk melodies he had collected at the beginning of the century accessible to a larger audience.