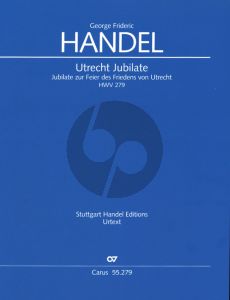 Handel’s Utrecht Jubilate HWV 279 enthralled London audiences right from its first performance, and it continues to do so today in concert halls and churches all over the world, thanks to the wide range of occasions when it can be performed. It was performed for the first time in a festive service on 7 July 1713 at St. Paul’s Cathedral to celebrate the Peace marking the end of the twelve year-long War of the Spanish Succession. The Utrecht Te Deum and Jubilate were Handel’s first sacred works in English and important milestones at the beginning of his London career.

The edition is based on Handel’s autograph (which unfortunately does not survive) and on a copy from Handel’s circle, which in some respects provides more information than the autograph and contains important details for this edition. In 1717 Handel revised the Jubilate in a smaller scoring for the ensemble at Cannons (HWV 246) and preceded it with a two-part Sinfonia which is also reproduced in the Appendix to this edition. The chorus is mainly scored in four parts, and is in eight parts in just one short movement. In two other movements the soprano part divides. The second alto solo part can also be sung by a high tenor.