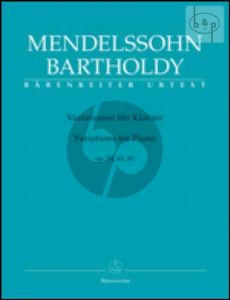 They were intended to be serious, the Variations op. 54 which Felix Mendelssohn contributed to a benefit album in 1841 in aid of the Beethoven memorial in Bonn. The attribute refers less to the musical character of the work than the composer's desire to write something quite different from the usual applause-seeking Variations brillantes of the period, through his particular compositional approach. And it is exactly this compositional skill which pianists, composers and music historians have ringing in their ears, when they describe MendelssohnÆs Variations sérieuses op. 54 as one of the key works of the Romantic piano repertoire. The Variations op. 54 gave the composer the impetus to study this music form in great depth. Following on directly from this work, Mendelssohn wrote the Variations in E-flat op. 82 and B-flat major op. 83, published posthumously. These are lighter works, both in tonal approach and also in their technical demands.

The edition brings together Mendelssohn's three most important sets of variations for piano - opp. 54, 82 and 83. It offers the versions of the first editions and in addition, for the first time, the numerous variants which survive in different autograph manuscripts. This offers an insight into the genesis of creating the pieces and also opens a wide field of artistic discussion for the interpreter.