Fantasy on Themes by Giuseppe Verdi 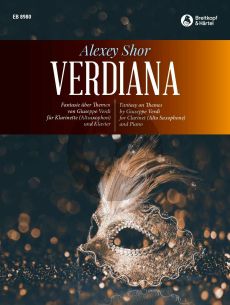 “Verdiana” is a musical tribute to Giuseppe Verdi. It takes some of his most famous melodies and reimagines them in styles of Samba, Bossa Nova and Tango to produce a virtuosic showpiece for clarinet and orchestra.

The work is structured in three movements. The titles of the movements do not only indicate from which operas the main melodies were taken, they also function as a hint to the styles in which the movements are written. The first movement, titled “Il Sambatore”, is a Samba based primarily on the melodic material from Verdi’s “Il Trovatore”. The second one, “Un Bossa in Maschera”, is a slow Bossa Nova and consists of an aria from “Un Ballo in Maschera”. The third and the most virtuosic movement is called “Don Tangoletto” and derives most of its material from “Don Carlos” and “Rigoletto”.

This publication also includes an alto sax part that can be used instead of a clarinet.