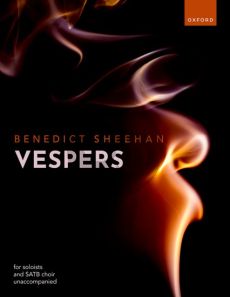 Inspired by Rachmaninoff's All-Night Vigil, Vespers is a 12-movement English-language work in the Eastern Orthodox tradition. Suited to concert and liturgical settings, it draws from a variety of Orthodox chant traditions, with Sheehan's use of asymmetric metres enhancing the textual expression of the chosen prayers, psalms, and hymns.

The work is infused with a deep religious sentiment, and the artful use of chiasmus places the ancient hymn 'Phos Hilaron' ('O gladsome Light') at its centre, defining its supreme message of light and hope. Virtuosic solos are underpinned by rich choral textures or offset by characterful interjections, with movements for chorus alone equal in impact. In a work that considers the past, present, and future of Orthodox liturgical music in America, Sheehan creates a distinctly American idiom rooted in the centuries-old Eastern Orthodox musical tradition, displaying a unique voice that is cohesively ancient and modern.