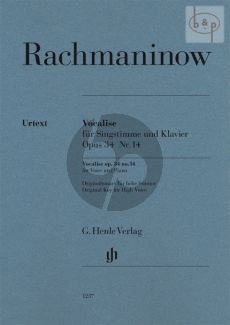 Rachmaninoff composed his collection of 13 songs op. 34 in 1912, but it was only three years later that he added a little closing piece without any text: the Vocalise, which soon outshone the other songs in terms of popularity and renown. Since its first performance in 1916 this expressive, melancholy piece has circulated in countless arrangements by others. Rachmaninoff himself made an arrangement for orchestra and voice, as well as one for orchestra alone. This Urtext edition contains the original version for high voice and piano, and is based on the autograph sources in the Glinka Museum in Moscow. A particular highlight is the separate vocal part that not only serves singers well but also all those instrumentalists who wish to play this wonderful piece using the original solo part.