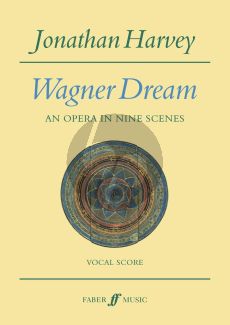 Earn 2,100 Poppels with this product

Wagner Dream by Jonathan Harvey is an opera in nine scenes for soloists, actors, chorus, large ensemble and electronics.Jonathan Harvey has described his opera - given its recent UK concert premiere at the Barbican - as about the clash of two cultures: late Romanticism and knowledge through emotional intensity on the one hand, oriental, Buddhist-inspired detachment on the other. It's a bold, thought-provoking experiment, based on a fantasy episode on the day of Wagner's death in Venice in 1883. Welsh National Opera will stage this nine-scene opera next season. This Cypres recording, with real-time electronic mixing by the composer and Gilbert Nouno, was made at the Holland festival in 2007. Thanks not least to Claire Booth and Martyn Brabbins, constant champions of the piece, it proves vivid and arresting as audio-only music drama.