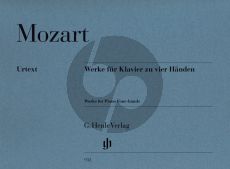 Earn 2,000 Poppels with this product

Mozart is one of the pioneers of works for piano four-hands; he was undoubtedly encouraged to do so through his music-making on the harpsichord with his sister, as depicted in the famous family portrait by della Croce (1780/81). This edition comprises all of the authentic sonatas and variations, as well as works which have only survived as fragments and were then later completed. In addition the volume contains a sonata accredited to Mozart and three four part compositions, which were originally either for mechanical organ or have survived with no indication as to the instrument for which they were written. This thorough revision was able to take into account new sources as well as the latest scholarly research on Mozart.