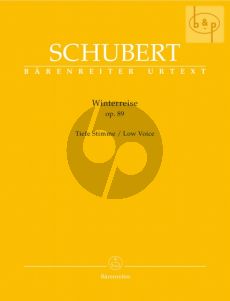 In spring 1827 Schubert performed the first part of his best-known song cycle 'Winterreise' for his friends for the first time. At this time he assumed that he had set all the texts belonging to the cycle to music. Only later did he come across the complete cycle of 24 songs in Müller's volume 'Gedichte aus den hinterlassenen Papieren eines reisenden Waldhornisten' of 1824. As a result, he set the twelve further poems as a separate group, partly paraphrasing the songs in the first part and partly continuing them. The appendices also contain four songs - 'Wasserflut', 'Rast', 'Mut' and 'Der Leiermann '- in Schubert's original keys before they were transposed down a tone by him or his publisher Haslinger. Famous song cycle, taken from the practical Complete Edition of Schubert Lieder, Volume 3 Foreword by Walther Dürr discussing the history of the work's composition and sources (Ger/Eng) With an English translation of the song texts by Richard Wigmore.