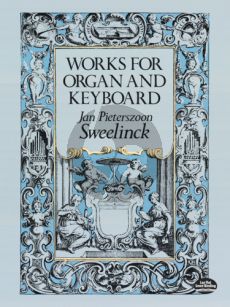 Jan Pieterszoon Sweelinck (1562–1621) was among the most famous organists of seventeenth-century Europe and an influential composer in the Dutch and North German tradition. He composed over 300 choral and instrumental pieces that bridged Renaissance and Baroque styles and helped prepare the way for the music of Buxtehude, Scheidt, and J. S. Bach. Today, the Dutch composer is best remembered for the inventive, sparkling music he wrote for organ and other keyboard instruments.

This remarkable treasury includes nearly all of Sweelinck's brilliant keyboard works, most of which have survived only in widely scattered seventeenth-century manuscripts. Reproduced from a clearly printed, thoroughly edited, and reliable 1943 critical edition, this volume contains important and innovative compositions heretofore difficult to find in a reasonably priced edition. The selections are divided into four principal sections (pieces playable on either organ or other keyboard; pieces for organ; pieces for keyboard; supplementary section) and include chorale variations notable for their double and triple counterpoint; toccatas and fantasias showing the influence of the Venetian organ school; and sets of variations on secular and dance tunes. Moreover, the supplement contains three incomplete and/or modified works and a fascinating, authentic fantasia by the great English composer John Bull. The fantasia was written in memoriam shortly after Sweelinck's death and was based on a now-lost fugue by the Netherlandish master. It remains the only testament to one of Sweelinck's finest works.

In Sweelinck's day, the 73 classic compositions presented here were among Europe's most popular pieces for organ and keyboard. In our own time, these lovely instrumental works retain every bit of their original intensity and vigor. Reproduced in this authoritative complete-resource edition, they will be welcomed by serious keyboard artists, who will find them as praiseworthy today as they were when first known and played in Europe over 300 years ago.