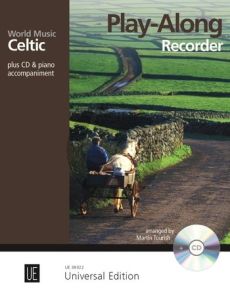 Tenor/Soprano Saxophone with Cd or Audio

Treblerecorder with Cd or Audio

Martin Tourish is an accordionist, composer and musicologist from Co. Donegal, now based in Dublin. Celtic music is in his blood, for his ancestors were noted collectors of dance music manuscripts dating back to the 19th century. With many recordings to his credit, he now offers his expertise to performers wishing to explore the rich culture of Irish and other Celtic music on a variety of instruments.

“World Music – Celtic” presents material from the Irish, Scottish, Welsh, Cornish and Breton traditions. It makes no great technical demands on the players, but Tourish points out that notation of this music is often “skeletal”, hence it is important to gain a knowledge of the individual traditions in question and, naturally, he offers plenty of information on performance practice.

The collection spans three centuries, from the blind bardic harpists of the 18th century to the international performers of the present day. Tourish accepts that this volume can only scratch the surface of a multi-faceted genre but hopes you will see it as a stepping stone to delve deeper into recordings, festivals and the very communities whence this music comes.

“World Music – Celtic” is available in eight formats, each with complete recordings and backing tracks on CD: as solo versions for violin, violoncello, flute, clarinet, saxophone, recorder or trumpet (with piano) and in an ensemble version for two melodic instruments (C, Bb or Eb), piano, guitar, bass and bodhrán.

In addition to the alto recorder part, this edition also contains a part for soprano or tenor recorder.

Tenor/Soprano Saxophone with Cd or Audio

Treblerecorder with Cd or Audio