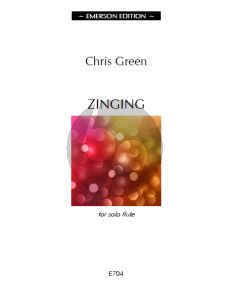 Zinging is an energetic piece for solo flute. It’s a great one for grabbing people’s attention or for use as an encore. It requires the ability to sing whilst playing, and there is one short beat-box section. Duration: 2.20 min. Grade 6 Chris Green was born in Cleveland, UK, in 1971. She began to play the piano when she was eight years old, and later studied music at Bretton Hall (affiliated with Leeds University). In 2006, aged 35, while working as a piano teacher, Chris had the chance to try the flute (it’s never too late). She fell in love with the instrument and, in 2007, decided to take lessons with Margaret Humphreys. As a regular participant at the Flute Kitchen in Harrogate, Chris had the privilege of meeting Greg Pattillo. It was his astonishing beat-box style of playing the flute which inspired her and ultimately led to the writing of her first composition, Unzipped for 2 flutes.