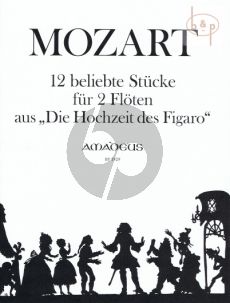 Mozart composed the opera The marriage of Figaro in 1785/86. The libretto was by Lorenzo da Ponte, after Beaumarchais's Le mariage de Figaro ou la folle Journée. The initial performance ban by Joseph II and the political background of the opera's plot only whetted people's appetite, increasing their curiosity to see and hear the opera, both in Vienna and Paris. At the turn of the century, editions of well known arias from the opera, arranged for two flutes, appeared in Vienna, Bonn and London. These three different editorial sites show the popularity of the arrangement culture, and of this arrangement in particular. The source for this edition was a print of the parts by Monzani & Hill in London, titled: Twelve Favorite Pieces, Selected & Arranged for Two Flutes, From the Opera Le Nozze di Figaro Composed by W. A. Mozart. For comparative purposes we have also used the edition (No. 100) of N. Simrock in Bonn, titled: Duos à deux flûtes, arrangés du Mariage de Figaro, Oper de W. A. Mozart. J. Cappi used the same arrangement for his Viennese edition (No. 1020). Now often regarded with some scepticism, such arrangements were extremely popular in the 18th and early 19th centuries. The genre met the need of amateur musicians, who discovered in this way well known pieces and arias from opera and oratorios, as well as chamber music and symphonies. For composers, these arrangements were a lucrative source of income. Mozart wrote to his father about his own instrumentation of the Entführung aus dem Serail for wind ensemble: This is no small job. By Sunday week my Opera must be set for harmony band - or I will be pipped at the post - and another will get the profit... We know from various early 19th century sources how cavalierly musicians went to work. Adding ornaments, whether melodic, expressive or rhythmical, altering articulations or dynamics: musicians as well as arrangers took many such liberties. We have brought back to the original Mozartian text most of the liberties of articulation, embellishments and dynamics in the sources used (model: the New Mozart Edition). Rien de Reede