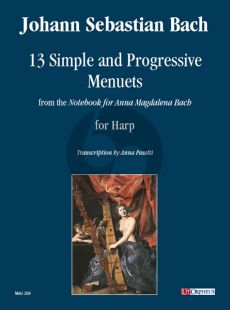 The study of Johann Sebastian Bach’s compositions on the harp has a long history. The first who understood its importance for educational purposes was Robert Nicolas Charles Bochsa, who inserted some fugues of Bach and Haendel in his monumental method for the harp op. 60, accompanied by detailed fingerings. However, it was from the beginning of the 20th Century that the great harp teachers began to work extensively on Bach’s repertoire.

Among the most illustrious examples we can mention Henriette Renié, who published two volumes of transcriptions, one containing ten preludes and one ten short pieces, Alfred Kastner who worked on the Two–part Inventions, Marcel Grandjany with his famous studies based on partitas and sonatas for solo violin, or Annie Louis David, who published two important volumes of preludes and fugues taken from The Well-Tempered Clavier, not to mention all those who transcribed just a single piece for concert purpose.

As is known, the Notebook for Anna Magdalena (Notenbüchlein für Anna Magdalena Bach), consists of two small manuscript volumes, the first compiled in Köthen in 1722 and the second in Leipzig three years later. The first contains only compositions by Johann Sebastian, while the second also includes pieces by other authors such as Couperin, Hasse and Carl Philipp Emanuel Bach.

The idea of ​​collecting in a volume some of the simplest compositions contained in the Notebook was born mainly from the desire to introduce even the youngest students to Bach’s music, in an easy and progressive way, so as to start as soon as possible at make them familiar with polyphonic writing and the use of embellishments, introduced here in a simplified version.