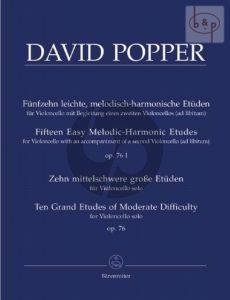 These two new editions (BA 6978 BA 6979) of David Popper's cello studies are the first modern publications of these standard compositions. The Austrian born Popper composed these studies during his tenure at the Royal Conservatory in Budapest in the late 1890s and they were first published between 1901-05. The 40 etudes found in op.73 focus on a wide range of techniques found in the major works in the cello literature. The 15 easy etudes are designed for the first years of lessons which lead to the 10 grand etudes which in turn lead to the op.73 etudes. Martin Rummel's editions offer new bowings and fingerings to reflect modern playing. The 40 Etudes op.73 also includes a German / English brochure containing technical tips and information by Rummel as well as references to the cello literature where the individual techniques are found. First modern edition of these standard studies. With bowings and fingerings for today's cellists Additional brochure to the 40 etudes with playing tips and references to where the techniques are found in the standard cello literature.