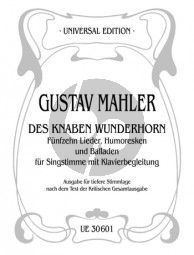 This edition is more oriented to practical performance than the New Complete Critical Edition. From the range designations of the Lieder, one can see that, despite the transpositions, not all fifteen Lieder of a volume are suited to one and the same voice. The alternative pitches and easier passages written by Mahler often for only one of the voice ranges of a Lied (and not necessarily always for the "original" voice range) are here provided for both voices.

The "Notes" (pp.165-170) show for which voice these were originally conceived and whether this has to do with a purely vocal facilitation or a musical variant. Unlike the "Kindertotenlieder", the fifteen "Wunderhorn" Lieder do not form a cycle and do not even suggest a unified collection of songs such as the "Rückert" Lieder.

They can only be organized according to their sequence of composition, which should, however, have no influence on the choice or order of a performance. As Mahler himself urged upon his singers: "I ask at the very least that you determine the sequence of the Lieder yourself." (Letter to the baritone Johannes Messchaert, 1906)