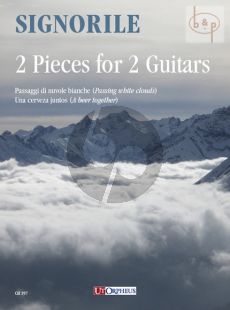 Giorgio Signorile was born in Cuneo (Italy) in 1962. He studied the guitar at the local Academy of Music - where his music masters were Pino Briasco and Paolo Manzo - obtaining his diploma with full marks. Later he attended some specialization courses mainly studying with the guitarist Betho Davezac. At the same time he started his concert activity as a solo player or as a guitarist in chamber music groups. Later he mainly played contemporary music with the Assieme Chitarristico Italiano, with whom he recorded two CDs, one for Dynamic and one for the Dutch Etcetera. Meanwhile he started writing pieces of music for his instrument and since then this activity has become more and more important. He has also been inspired by his travelling to distant places and meeting cultures and lifestyles that were so different from the modern western world. In 2007 he won the national contest for guitar compositions for ensemble music 'Suoni Nuovi 2007' in Latina with his piece Suite per Sveva, published by Ut Orpheus. Recently some of his works for guitar have been included in the CDs of such impressive Italian guitarists as Lucio Matarazzo and Giulio Tampalini. The prestigious magazine Guitart and the online magazine dotGuitar regularly bring out his survey on teaching method and guitar technique. He teaches in the music course of a middle school which is still a valuable part of his activity as a musician. He enjoys the comparison between two different realities and the dialogue with his students where respect and knowledge are exchanged and interact, thus creating culture, amusement and interest - in other words a mutual enrichment.