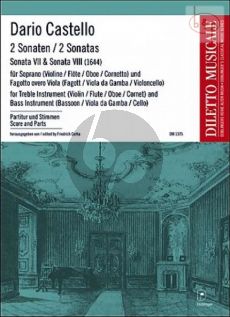 Two books by Dario Castello are known to us. Only one copy of each has come down to us in their complete form. The repeated printings point out the popularitiy of Castello's sonatas. He also presumably performed these works himself: the title of his second book refers to him as the leader of an instrumental ensemble. That Castello apparently placed great importance on being progressive is evidenced by the very title: 'Sonate concertante in stil moderno'. The music with its robust melodies, the expressiveness of the 'Adagio' sections, the nonchalant handling of dissonances and the tendency toward the impulsive 'stile concitato' is clearly a product of the 'agitated' mood of that time. Castello worked under Claudio Monteverdi at San Marco in Venice, and the influence of the older master is unmistakable. Overall, Castello's sonatas occupy an important position in the development of a true instrumental style. (from the preface by Friedrich Cerha)