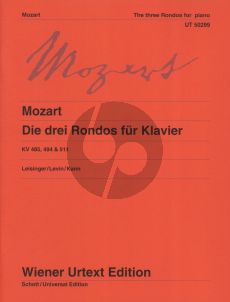 Mozart's three popular rondos, created in Vienna in the mid-1780s, are a many-faceted addition to his piano sonatas. These rondos include the rather easy-to-play Rondo in D major KV 485 and the pensive Rondo in A minor KV 511. The volume is completed by the Rondo in F major KV 494 which was later included by Mozart in his Sonata KV 533 as final movement. In the charming version of an individual piece, the work is somewhat easier to play than the sonata version; thus, it will be a valuable addition to music lessons. The musical text is based not only on the first editions, but also on Mozart's autographs which are extant of all three pieces. 32 pages.