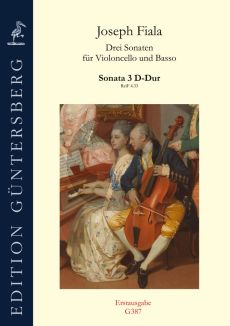 Joseph Fiala was a versatile and well-travelled musician from Bohemia who was a master of the oboe, viola da gamba and violoncello. During his time in Salzburg and Vienna, he was a close friend of the Mozart family. Among his works, his three violoncello sonatas have remained relatively unknown until today, and we are pleased to be able to present them now in print for the first time. The sonatas, which were written towards the end of the 18th century and are joyful to play and quite demanding in places, testify to Fiala's great mastery of the cello.