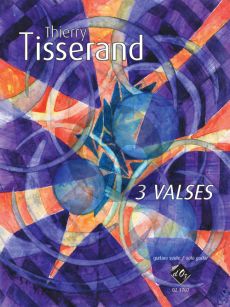 The French guitarist/composer Thierry Tisserand has become a familiar name in the d’OZ catalogue. He has written many works for solo guitar and in ensemble and for all standards. The three pieces under review here are aimed primarily at the Intermediate player and are simply delightful additions to the repertoire. Each one is a two-pager, full of lovely melodies, nice harmonies and is a little miniature gem. La Valse Diaphane begins and ends with some delicate harmonics; sandwiched in between is a moderately lively flowing waltz in E minor. The second waltz, Square de l’hermitage is a slower introspective and nostalgic work and is the most “French” of the trio. Clair-Obscur is another quicker one with an option of playing with Capo at fret 2 which would put it up to B minor, the same key as the previous one. As previously stated, these are very tuneful compositions, all well written and with enough variety between each other as to be highly suitable for performing as a set. The music is clearly presented and all well fingered throughout. Highly recommended. Steve Marsh (Classical Guitar Magazine)