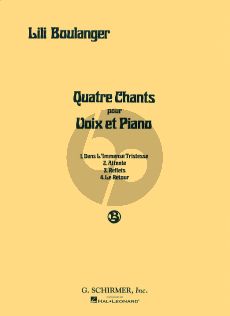 Lili Boulanger was the sister of the famous music teacher Nadia Boulanger. She was a composer for the last 10 years of her tragically short life - she died at 25. Her music is generally beautiful, delicately coloured, and touching, standing in the main line of French music exemplified by Faure, albeit somewhat tinged with the influence of Debussy's Impressionism. These four Songs are settings of texts by de Calone and Maeterlinck among others, with an English version by Jane May. The first song, Dans l'immense tristesse speaks of a mother's grief on the death of a child. Attente (Expectation) is about the anticipation of love, Reflets is gentle and reflective yet tinged with fear which breaks out towards the end, whereas Le Retour (The Return) deals with the return of Ulysses to Ithaca.