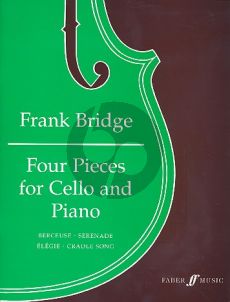 These four pieces for Cello and Piano accompaniment, were composed separately between the years 1901 and 1910 and appeared in print in several different versions, ranging from piano solo to full orchestra. They were all primarily written, however, for cello and piano so appear here in their original form. The editor - Julian Lloyd Webber - has been responsible for the addition of bowings and fingerings.