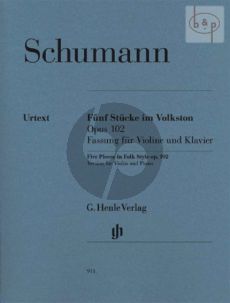 As with most of Schumann's duos for solo instrument and piano, the "Pieces in Folk Style", originally for violoncello and piano, were also published for an alternative instrument. The publisher expected greater circulation and a higher turnover with an additional edition for violin. Apart from a few changes necessitated by the instrument, there was a series of substantial ones in nos. 1 and 5, which partly also concern the piano part. Thus we can be confident that the version for violin was undertaken by Schumann. Now it is available in an Urtext edition for the very first time! Ernst Schliephake has provided practice-orientated fingerings and it is thus excellently suited for the teaching of pupils of medium ability upwards.