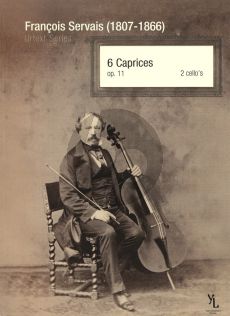 Say the word “caprice,” and our minds immediately go to Paganini and Piatti. However, other composers also wrote caprices as studies, among them François Servais (1807-66). Our new edition of Servais’s 6 Caprices is based on the two first editions, Richault (French) and Schott (German), graciously provided by the Servais Society, faithfully combined into a beautiful, newly engraved, critical edition. Our edition is the first to include a score of the two cello parts. All the textual variants between the two first editions are noted in the footnotes. Our edition also comes with separate parts, which include Servais’s original fingerings.