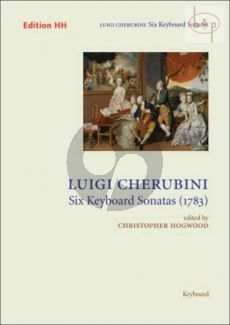 We celebrate Cherubini's 250th anniversary this year with an unusual publication. Although the composer is universally known for his operatic works, one of his earliest publications (at the age of 23) was this set of six sonatas for keyboard. Vivacious and melodically-appealing two-movement works, they sound equally well on the harpsichord and the forte-piano ù the latter instrument being popular around the court of the Grand Duke Leopold in Florence where the works were issued. This edition, with full critical notes and facsimiles, also includes editorial suggestions for the many small cadenzas and "lead-ins" which are required as improvised extras in such music.