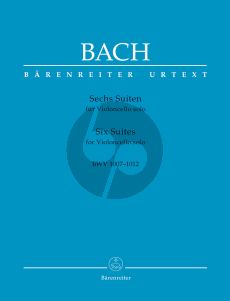 When you think cello, you think of Bach’s immortal cello suites. The suites take centre stage in the cello literature. They are timeless and beautiful and accompany cellists from their student years up through their professional career at the highest level. Appropriately and not surprisingly there are countless editions of the suites. But the composer’s autograph has not come down to us. It is lost and this circumstance has always been a major challenge for editors. The four surviving handwritten sources and the original first edition of 1824 differ in many details, the articulation and phrasing being particularly ambiguous. At Bärenreiter, having published the New Bach Edition and presently publishing the New Bach Edition-Revised, we feel particularly committed to the cello suites. We have approached the editorial problems from several angles and have published editions that meet the needs of students and professional performers alike. This new edition, based on volume 4 of the New Bach Edition – Revised (NBArev), now completes Bärenreiter’s collection of the cello suite editions. Andrew Talle has fundamentally reassessed the relations between the surviving sources and has drawn conclusions regarding their evaluation and consequently the genesis of the suites. His evaluations are augmented with thorough discussions of the instrument for which the suites were conceived and the interpretative practices in Bach's day. The musical text of the edition is based on these findings. It approaches the composer's original intentions as far as the sources will permit. Details regarding articulation were deemed as being viable and were added to the musical text if they appeared in the majority of the sources. “This edition does not present a perfect reconstruction of the lost autograph; no editor could claim to do so. Instead, I have attempted to provide musicians and scholars with a reliable version of the surviving musical text of the six cello suites and to shed light on the options which the Bach sources offer.” - Urtext edition with articulation by the editor on the basis of intensive source comparison - Musical text identical to the text in New Bach Edition – Revised Volume 4, Book 1 - Detailed introduction (Ger/Eng)